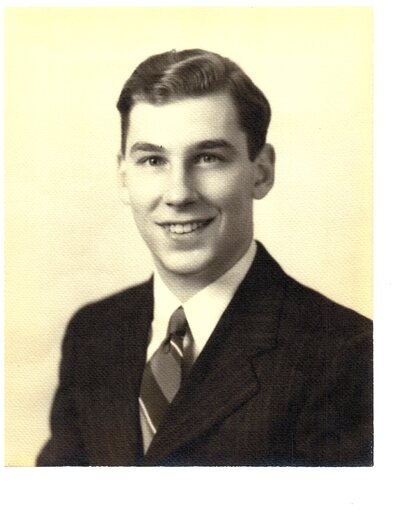 William Lewis Hamilton, "Bill", age 100, passed away August 4, 2021. Born in Schenectady, NY, May 5, 1921 to the late Sarah and Horace Hamilton, Bill grew up in Cleveland.  He received a B.S. in Mechanical Engineering at Case School of Applied Science and was a member of Phi Kappa Tau. After graduation, he joined the Navy, assigned to the heavy cruiser USS Quincy which took part in the battles for Normandy, Cherbourg, Marseilles, Okinawa, and Japan, and took President Roosevelt to the Yalta Conference. He attained the rank of lieutenant.  After the war, he worked as an engineer in Lima, OH, and an inventor in Kirtland, OH, holding several patents.  He lived in Painesville, OH, writing "Spiritual Quest of a Scientific Mind," then moved to assisted living in Columbus, OH.  He was a Registered Professional Engineer and member of Am. Legion #273, SAE, Am. Welding Soc., and Cleveland Engineering Soc. He married Isabel Salem of Ashtabula, OH in 1943; divorced 1975.  Pre-deceased by brother Edward L. Hamilton; survived by children Carol A., William E., and Marsha J., two grandchildren, nieces and nephews.  Cremains to repose at Ohio Western Reserve National Cemetery.  Arrangements by TIDD FAMILY FUNERAL HOME, HILLIARD, OH.

To send flowers to the family in memory of Willliam Lewis Hamilton, please visit our flower store.