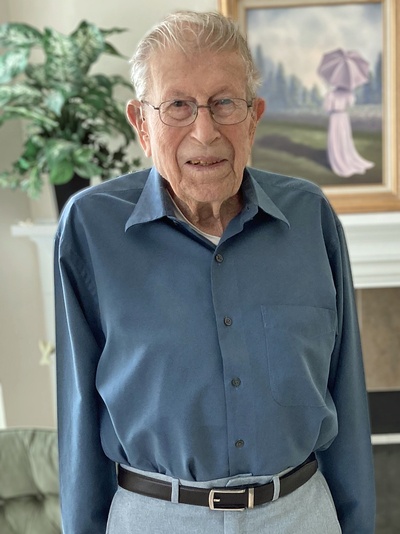 William “Bill” Aumiller, Age 95, passed away Friday, August 6, 2021. He was born on January 2, 1926. Bill graduated from West High School in 1944. While in high school he worked as a doorman at the Palace Theater where he met the love of his life, June, who was working there as an usherette. They were married in 1946 and celebrated their 75th wedding anniversary this past May. Bill was preceded in death by his parents, Harold and Helen Aumiller. He is survived by his loving wife June; children, Doug (Kathy) Aumiller, daughter Vicki (Rennie) Beetham, grandchildren Corey (Laura) Aumiller, Kelly (Chase) Bryan, Mike (Amy) Walters, and great-grandchildren Anna Lee and Walter Aumiller and Colt and Haley Bryan. He is also survived by a very special “daughter” Laura Burden. Bill served 3 years in the Merchant Marine during WWII in the Philippines, Australia, and the Caribbean. While in the Philippines he ran into three of his West High classmates. What a celebration they had! He was in the Philippines when VJ Day was announced. Bill and June’s life was filled with many good friends, happiness and joy. His life’s work was in carpentry as Superintendent with Miller Construction and General Maintenance and Engineering. He built two homes, one in Hilliard where their children were raised and the second in Powell where they lived for 37 years. They spent 22 years wintering in their home in Cape Coral, FL. In retirement they resided in Dublin. The Family will receive friends on Tuesday, August 10, 2021, from 2-7 P.M., and Wednesday, August 11, 2021, Visitation will be held 1 hour prior to Service time at 11:00 A.M., at TIDD FAMILY FUNERAL HOME, 5265 NORWICH STREET, HILLIARD, OH, 43026. Interment will be at Wesley Chapel Cemetery.

To send flowers to the family in memory of William “Bill” Aumiller, please visit our flower store.