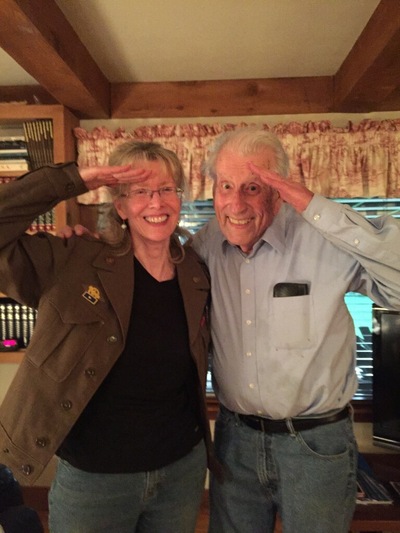 Dick is survived by a son, Richard “Rich” Lese and his wife, Judy Basso-Lese of Columbus, Ohio and a daughter, Pamela Reyes and her husband, Ebel Reyes of Atlanta, GA.  He is also survived by two grandchildren, Evan Lese and Rachel Lese, of Columbus. Dick’s wife and best friend of 67 years, Lois Lese, died in 2014.  Dick is survived by many friends and neighbors who knew him as a surrogate father or grandfather. Dick’s two siblings, William “Bill” Lese and Juliann Goetz preceded him in eternal rest.

Dick served in Cannon Company, First Infantry Division (known as the Big Red One) during World War II and was honorably discharged in 1945 after advancing to the rank of Sergeant.  The Big Red One led the invasion of French North Africa in November, 1942. In 1943, the 1st participated in its second amphibious operation during the invasion of Sicily. After the liberation of Sicily, General Eisenhower selected the 1st Infantry Division for Operation Overlord, the cross-channel invasion of France.  After taking heavy casualties at Omaha Beach on D-Day, the First Infantry Division advanced through France, Belgium and into Germany. By September 1944, the 1st Infantry Division had reached the German frontier and led the attack to seize the city of Aachen, the first German city to fall to the Allied armies. The Fighting First faced equally tough combat  in the Battle of the Bulge; and the final push into and across central Germany. By the end of the war in Europe on May 8, 1945, the 1st Infantry Division had reached Czechoslovakia. Dick’s service was recognized with the Combat Infantry Badge, the Bronze Star, the Europe-Africa-Middle East Campaign medal (showing six campaigns) and the Army Good Conduct Medal. His Unit was awarded the Army Presidential Unit Citation.

Dick enjoyed sharing his lighter, humorous adventures of WWII with friends and family and even wrote a brief memoir of his experiences during the war.

Dick spent his working career in construction and was the owner of a residential construction company for many years. He was most recently employed as a commercial construction superintendent for the Ruscilli Construction company, from which he retired.  Dick was known as a master craftsman by those who worked with him and used his exceptional leadership skills in mentoring others in the field. There were few construction problems that Dick couldn’t solve. He was always willing to help his children, friends and neighbors who often called on him for help with minor and major projects that required an expert’s input or hands-on involvement.

One of Dick’s great loves was aviation. He was an instrumented rated private pilot and owned several single-engine airplanes during his life.  He flew his last plane, a Mooney, well into his 80’s. Dick was also an avid reader of non-fiction and especially enjoyed books by David McCullough.

Dick was a devoted member of the Lion’s Club and was recognized for 60 years of service before retiring from the club. He spent hours volunteering in the club’s campaigns to help those in the U.S. and around the world with impaired vision.

For those who wish to make a donation in Dick’s memory, the following is offered: Lions Club at lionsclub.org (click on Donate & select either Empowering Service Fund or Disaster Relief Fund & follow the prompts) or call 1 (630) 571-5466 & select the Donor Assistance option.

The Tidd Family Funeral Home, 5265 Norwich St., Hilliard, OH 43026 (614)-876-1722, assisted the family. Please visit www.tiddfuneralservice.com to share your favorite memories of Dick or to send your condolences to his family.

To send flowers to the family in memory of Richard A. Lese, please visit our flower store.