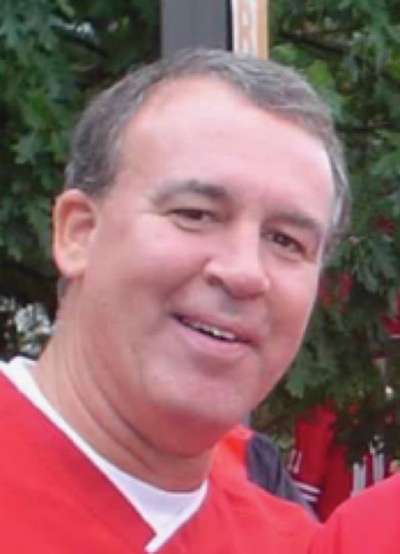 Philip Edward Waters, 63, passed away suddenly and unexpectedly on April 20, 2021 in Hilliard, Ohio, a suburb of Columbus, Ohio. Philip was born in Portsmouth, Ohio on April 10, 1958 to Gola Edward Waters and Patricia Margaret (Gannon) Waters.  Soon he was joined in quick succession by three other siblings (Ann, Mary, and Michael) earning him the moniker of “Bubby”. Gola and Pat moved from Ohio to Illinois to Pennsylvania for job relocations before settling in Carbondale, Illinois in 1965, where Gola became a professor of finance at SIU. Pat and Gola loved raising their kids in Carbondale, a university-town setting.  Philip was definitely the First Born Son and all that entails. He bossed all his siblings around, frustrating for the Other Three, as Mom and Dad adored him and he could do no wrong.

He was an outstanding student and three sport varsity athlete for the Carbondale Community Terriers (CCHS) graduating in 1976. In football, he played free safety (All South Selection) (his junior year) and loved playing defense.  In his senior year football Coach Tom O’Boyle, a lifelong mentor, needed him to be quarterback and he was also elected captain by his teammates.  He transitioned to starting quarterback for the team.  This amazing group of young men formed the first football team from Carbondale to qualify for the state high school 4A playoffs. For his selfless efforts, Phil was awarded the Harry Bobbitt Spirit Award for outstanding leadership.

He has regaled his family for years about his friends, his teammates, and their accomplishments.  He especially enjoyed the pure thrill of competition.  The classes of 1976 and 1977 held a very special place in Phil’s heart as they always held joint class reunions. They mourn his death.

His superior academic efforts in the classroom and on the playing fields and basketball court earned him admission to the US Naval Academy where he was recruited to play basketball.  A new coach arrived on the scene his Plebe Summer and Philip felt his efforts would be better appreciated at St. Ambrose College, his father’s alma mater, and he transferred. This wise and fortuitous transition to freedom provided Phil with some of the greatest memories and friendships of his life. He played football for the Bees, becoming a three year starter at safety. He led the NAIA football division in interceptions his senior football season. He was named a NAIA District 15 All American. He graduated cum laude from St.   Ambrose in 1980 with a BS in Biology.

St. Ambrose inducted him to the Hall of Fame in 1995. The memories, friendships, and story-telling continued the rest of his life. One of his favorite times every year was gathering with his friends and teammates at St. Ambrose’s homecoming week where the laughs, lies, and love grew stronger with each passing year.

A new adventure began when he matriculated to Columbus, OH to continue his graduate education at The Ohio State University (OSU). Wherever Phil went he made fast friends. He often told the story of arriving in Columbus and being whisked off to a party even before unloading his car.  He earned a MA in Exercise Physiology from OSU in 1983.  He thoroughly enjoyed his studies and he continued in its doctoral program.  While working on his dissertation, he was hired by Sports Imports and eventually managed the Eastern/Midwest Sales region.  At Sports Imports for 26 years, he held many different positions and represented the company at several different Olympic Games in the sport of volleyball. He thrived in his job as it allowed him to stay involved in sports, travel, and engage with high school and university Athletic Directors who shared his passion for sports. While at Sports Imports, he generously donated professional grade volleyball equipment to Christ the King Catholic School in Dallas TX, Assumption School in Morristown, NJ, and St. Malachy Catholic School in Brownsburg, IN where his nieces and nephews attended school.  Sensing a change was imminent due to ownership restructuring at Sports Imports, he finished his sales career at Kiefer Flooring managing projects involving sport playing surfaces throughout the US.

As an early retiree in 2017, who espoused the theory of FIRE (Financial Independence, Retire Early), he quickly embraced the fantastic world of (more) freedom to do as he pleased.  In retirement he really enjoyed being a Florida snowbird. Besides avoiding the harsh Ohio winters, he continued his baseball obsession by being close to the St. Louis Cardinals spring training facility.  He loved not only watching baseball, but in Florida he was able to continue to display his athletic prowess on the softball field with his fellow retiree friends.

He was a fanatic sports enthusiast often with the appellation of “Mr. Baseball” for his knowledge of the fine points of the game, statistics, and baseball history -- truly a savant of baseball – much to the amazement and/or chagrin of those who surrounded him at the games. He loved the St. Louis Cardinals, the Cincinnati Reds (particularly Pete Rose), the Columbus Blue Jackets and of course, his beloved Buckeyes.

Philip planned unique experiences for his friends.  He had several years of “rooftop” parties at Chicago’s Wrigley Field including the last year, when 120 of his closest friends gathered on the rooftop to watch baseball while having a “few” cold ones.  He was the consummate host at his unbelievable tailgates in the OSU football parking lot.  Many times Phil arrived before the sun rose with his good friends and fellow underwriters Randy, Janet, and Dave to set up the party for their friends to enjoy. They would leave late at night, well after the game ended to “avoid traffic”, but really they did not want the party to end.  (P.S. Since he’s in heaven, he still “dislikes” (not hates) the University of Michigan. Go Buckeyes!)

He gave generously of his time, talent, and treasure to his parish church, St. Brendan the Navigator in Hilliard, OH and the Diocese of Columbus.  He was a regular 7:15am Mass attendee, as a devout and practicing Catholic his entire life.  He was a fulltime volunteer at the Mid-Ohio Foodbank in Columbus as a way to give back and to productively and selflessly fill his days when off the beach and/or softball     fields. In his retirement he earned the St. Ambrose Presidential Key Award and the Legacy Giving Society for his many years of generous financial support of academics and athletics at St. Ambrose University.

As much as he loved his friends and teammates, his fierce devotion to his family was the center of his life.  He was our steadfast anchor.  You always knew where you stood with him, just like Dad. You always knew you could depend on him, especially in later years.  He cared lovingly for Mom and Dad as their health declined.

Uncle Phil will be remembered by his Lucky Seven nieces and nephews for traveling far and wide from IL to IN to TX to NJ to MA to NY to PA to support them throughout their lives.  From baptisms, to first communions, to confirmations, and to graduations at all educational levels …all important life events that Uncle Phil never missed.  He was a frequent fan at their wide variety of sporting events.  Ever the athlete, he loved to “coach” from the sidelines, again, mirroring Dad-- always reviewing their efforts ad nauseam after the games ended with much eye rolling from the kids.

Philip was preceded in death seven months ago by his biggest (loudest) fan – his dad Gola.  He is survived by his mother in Dallas, TX, sisters Ann Beytagh (Patrick) in Dallas, TX, and Mary Pat Boehler (Paul) in Morristown, NJ, and brother Michael (Linda) in Indianapolis, IN.  He is also survived by his seven nieces and nephews, and his first great niece:  John Boehler (Alex), Betsy Boehler Lattanzio (Brian), Andrew Beytagh, Mary Clare Beytagh, Meredith, Katie, and Annie Waters, and his brand new great niece Edie Boehler.  He loved them all unconditionally.

Our hearts are broken. We are all saddened beyond words for the sudden loss of our beloved son, brother, and uncle.  We know God promises Eternal Life, but not necessarily a long retirement.  As such, Phil would advise fun times and charitable endeavors over material possessions.

Our family wishes to thank Phil’s friends in Columbus, Ohio for their prayers, kind words, and hilarious stories to buoy us during this difficult time. We would like to thank Rich, Bonnie, Eli, Randy, Janet, Dave, and Kathy for their unconditional love, support, and friendship of our beloved brother. Kathy was a special friend who shared many adventures and much love with Phil over the years.

Please join us to remember and celebrate Phil’s life.

A private Rosary will be prayed on Monday evening April 26th at the Tidd Family Funeral Home in Hilliard, Ohio.   The Mass of Christian Burial will be at St. Brendan’s the Navigator Catholic Church, 4475 Dublin Road, Hilliard, Ohio 43026 on TUESDAY, April 27th at 11:00a.m.  Father Bob Penhallurick will preside.

Burial will be on Friday, April 30th at Sacred Heart Cemetery in Maquoketa, Iowa. At 1:00p.m. Phil will be buried in the Gannon family plot next to his Dad, grandparents, and great grandparents.  Father Austin Wilker will preside.

Please share your favorite memories of Phil or send your condolences to his family by visiting: www.tiddfuneralservice.com.

To send flowers to the family in memory of Philip Edward Waters, please visit our flower store.