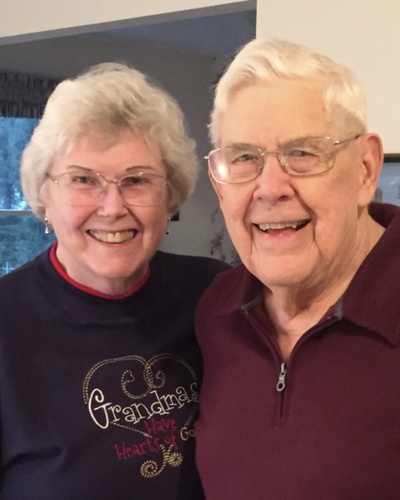 Pattie Hayes went to be with the Lord on 4/22/22 at the Kobacker House in Columbus, Ohio. Pattie was born in 1930 in Akron, Ohio to the late Elizabeth McRoy and Edwin McCarty. She graduated from Shaw High school in East Cleveland, Ohio. She married Willard Hayes in 1951 and together they raised two children. They were members of Northwest Bible Church for 28 years.

Pattie will be remembered for the two most important things in her life, her faith and her family. She was faithfully and happily married to Will for 67 years and was devoted to the Lord Jesus Christ for 48 years. She loved being a grandmother and prioritized spending time with each grandchild, making life special for each one. She was a prayer warrior as she consistently lifted up her family and friends to the Lord.  The home was known as a house of prayer where weekly prayer meetings were held for more than a decade.  She also had a gift of hospitality, hosting all who needed a place to eat or a place to stay for a bit. By sharing their home, Will and Pattie met the needs of people as varied as internationals, missionaries, foster children, drug addicts and carpenters. Her hospitality was motivated by her love for Jesus and those who benefitted are grateful.  Pattie’s enthusiasm and joy will be greatly missed.

The Tidd Family Funeral Home, 5265 Norwich St., Hilliard, OH 43026 (614)-876-1722, assisted the family.  Please visit www.tiddfuneralservice.com to share your favorite memories and to send your condolences to the Hayes Family.

To send flowers to the family in memory of Pattie Hayes, please visit our flower store.