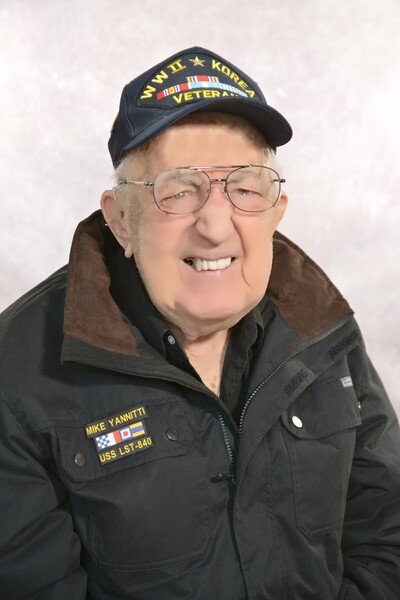 Mike was born August 25, 1925, in Youngstown OH, the first-born son of John and Isabelle (Caruso) Yannitti.  He was preceded in death by his parents and three siblings, Richard, Donald, and John Yannitti.

Mike married the love of his life, Rose M. Mulidore, on November 19, 1955, and they enjoyed 62 years of marriage together until she passed away on February 11, 2018.  He leaves behind him his daughters, Patti (Ken) Hodges of Hilliard, OH, and Mary (Bryce) Bond of North Jackson, OH.   Mike had one granddaughter, Hanna Rose-Marie Bond.  Hanna takes after Mike with her grit and determination.

Mike served in the U.S. Navy, he was permitted to graduate high school and then he was drafted in February 1944.  He served in World War II in the Pacific Theater and survived the battles at Iwo Jima and Okinawa.  Mike also participated in the atomic bomb testing at Bikini Atoll.   He then joined the reserves and was called up for the Korean Conflict. Mike grew up in the service and those experiences shaped him into the most incredible and witty man.

After the service, he became a successful Nationwide Insurance Agent until he retired at the age of 72.  He learned to waterski at 65 years young and continued to waterski until he was 87.  Waterskiing and eating his wife’s great Italian food were the things he loved the most as well as spending time with his granddaughter.

After Mike’s retirement, he and Rose lived at Lake Milton and for 22 years and they enjoyed living at the lake.  They joined the Lake Milton Association, and they were soon loved and adored by friends and neighbors who especially loved Mike’s outgoing personality and Rose’s canned hot peppers.  The friends at the lake became their second family.  Their pontoon boat was named the “Young and the Restless” which was a favorite of all on the lake.  The family loved the water and enjoyed jet skiing, water skiing, tubing and taking visitors on the pontoon boat for Mike’s narrated tour of Lake Milton and the Mahoning river.

Mike had been staying at the home of his daughter Patti for the last few years.  During that time, Mike had the most loving and spirit-filled caregivers in Shirley and Tina. Most recently, Mike had moved to the Inn at Library Way Assisted Living Residence.  Mike, during the last month of his life, was surrounded by the caring staff at the Inn at Library Way.  His family thanks all those that impacted his life and were touched by his humor and love of the Lord.

To leave the family a message of condolences, please visit www.tiddfuneralservice.com

To send flowers to the family in memory of Michael Yannitti, please visit our flower store.