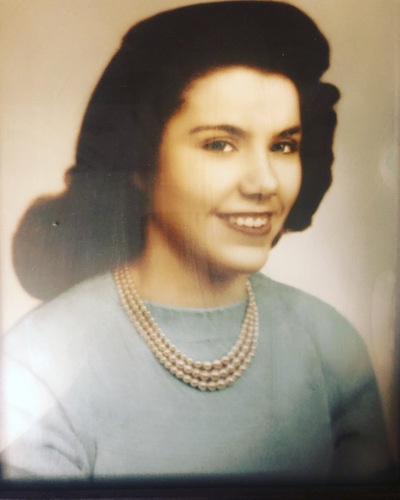 Mary Lou Marvin (Galentine), age 91 of Hilliard, Ohio, passed away peacefully at home surrounded by her children on April 20, 2022. Mary Lou was born on February 8, 1931 in Columbus, Ohio. She was the daughter of the late Francis Galentine and the late Rachel (Harbage) Galentine. Mary Lou was preceded in death by her husband of 65 years, Robert Marvin, her sister Eileen White and her brothers John, Francis, Robert, Delbert, James and Larry. Surviving to cherish her memory are her son, Robert (Kelly) Marvin, daughter Linda McGraw, her beloved grandchildren Robert (Miki) and Brauch Marvin and Sarah and Logan McGraw and her brother William. Mary Lou attended Skidmore Elementary where she was the school’s 5th Grade spelling champion. She was a 1949 graduate of Columbus West High School and attended The Ohio State University. She was a devoted mother who served as a Girl Scout Troop Leader and a Cub Scout Den Mother. Mary Lou proudly served as PTA/PTO President at Avery Elementary School in Hilliard and organized the first school library at Avery. She loved attending all of the school, sporting and other events in which her grandchildren participated and was very proud of each of them.

After Rob and Linda began high school, Mary Lou went to work for the JC Penney Company selling shoes at its Westland Mall store. She thrived in her career having led all JC Penny associates nationwide in shoe sales for 3 consecutive years. As a reward for these achievements, the company flew Mary Lou and Bob to Dallas, Texas each of those years to attend and be recognized at the company’s annual meeting. She loved working at Penny’s and made many lifelong friendships there. Mary Lou was a big fan of OSU football, the Cincinnati Reds and recently became a big fan of the Columbus Blue Jackets. Mom was the biggest tennis fan we have ever known and could talk about all of the leading players over the past 50 years. Her absolute favorite players were Jimmy Connors, Pete Sampras and her all-time favorite, Rafael Nadal. Mary Lou was an animal lover beginning with the goats and a blind horse she had growing up and ending with 6 dachshunds, the last one, Mitsy, being saved from a life on the streets by Mom. She fully expects to be reunited in Heaven with all of her dogs.

Mary Lou was a 65-year member of the Hilliard United Methodist Church and treasured her friends there, especially when they were discussing the Blue Jackets. She was also a 65-year member of the Order of the Eastern Star of Ohio-Triangle Chapter. In addition to all of this, Mary Lou and Bob found the time to volunteer for Meals on Wheels for 15 years dedicated to combatting senior isolation and hunger.

Mary Lou says God bless you to all of you and that she will see all of us again.

Please visit www.tiddfuneralservice.com to share your favorite memories and to send your condolences to the Marvin Family.

To send flowers to the family in memory of Mary Lou Marvin, please visit our flower store.