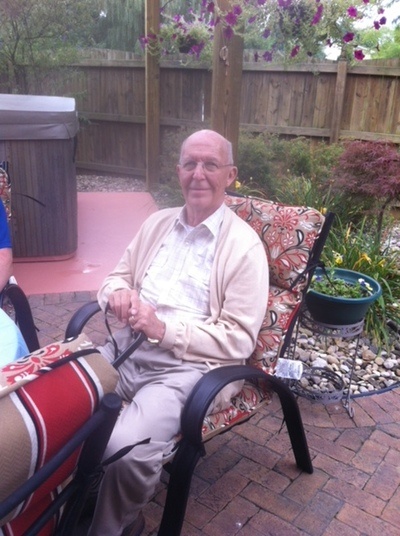 Mark Arthur Kuhn, 91, of Hilliard, passed away September 3, 2020 seven and half years after the death of his beloved wife Evelyn. He was born on April 3, 1929 in Burkhart, Ohio to Joseph and Mary Kuhn. Evelyn and Mark spent nearly 50 years in Caldwell, Ohio and were faithful members of St. Stephen’s Catholic Church. Since 2013, Mark has been cared for at Traditions in Hilliard. He is survived by his children: Stephen (Debbie) Kuhn, Columbus; Robert (Janet) Kuhn, Lexington, KY; Thomas (Susan) Kuhn, Rock Hill, S.C. and Lisa (David) Dembinski, Hilliard. He is also survived by her seven grandchildren: Bryan (Laura) Kuhn, Alicia (Aaron) Irwin, Amanda Kuhn, Matthew Kuhn, Nicholas (Julie) Kuhn, Douglas (Antonia) Dembinski, and Kyle Dembinski and five great grandchildren, He was preceded in death by his brothers Herman and Leroy as well as sisters Dorothy, Emma, Matilda and Nellie. A Mass of Christian Burial will be celebrated at St. Stephen’s Catholic Church in Caldwell on September 10 at 10:30 AM. Interment will be at Mt. Olivet Cemetery in Caldwell.  In lieu of flowers, friends are asked to consider memorial contributions to: National Church Residences Hospice or National Church Residence Mill Run, 3550 Fishinger Blvd., Hilliard, Ohio 43026.  Please share your favorite memory of Mark on this web page or send your condolences to his family.  www.tiddfuneralservice.com.

To send flowers to the family in memory of Mark A. Kuhn, please visit our flower store.