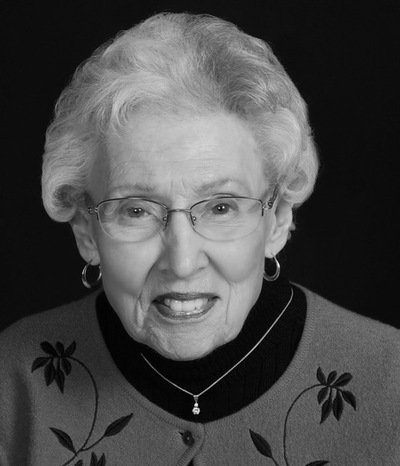 Marjorie M. Coyle passed away peacefully at home in Hilliard, Ohio on December 12, 2020. She was born in North English, Iowa and grew up in rural central Iowa. She graduated from Mt. Mercy College in Cedar Rapids, Iowa. She began her career working for United Airlines in Toledo Ohio, maintaining radio contact with flights as they came and went from Toledo Airport. She proudly stated that she also served as a stand-in for a “bag of sand”, using all of her 105 lbs. as ballast while pilots trained in executing loops etc. for special pilot licenses. Thus began her lifelong love of roller coasters. Before retirement, Marjorie and her husband Edward J. Coyle lived in Sandusky, Ohio where Marj worked as a legal secretary and later as an executive secretary at the New Departure Hyatt division of General Motors, Inc. She and her family were active members of Sts. Peter and Paul Catholic Church and she volunteered for Hospice and for the Meals on Wheels program in Sandusky. After retiring, she and Edward relocated to Hilliard, Ohio to be closer to family and friends. Marjorie was a devoted parishioner at St. Margaret of Cortona Catholic Church for more than 24 years. She was an active volunteer and served as Secretary of the Young at Heart Club. She was predeceased by her husband Edward, her sister Doris Tafoya and her beloved son William. She is survived by her loving children Thomas M. Coyle (Karen), Suzanne C. Helmick (Daniel) and Bill’s widow, Deborah Coyle. She also leaves her devoted grandchildren Ryan Coyle (Kaitlyn) of Raleigh, N.C. and Megan Morrow (GySgt. Jeremy) and great-grandchildren Jameson and Annabel Morrow, currently stationed at Marine Corps Base Camp Butler in Okinawa, Japan. She is also survived by her dear sister, Eloise Thoma and many nieces, nephews and friends. Marjorie’s family offer heartfelt thanks for the loving care she received for several years from the staff at Always Neighbors in Hilliard and for the wonderful care during her final days from Mt. Carmel Hospice. A private Mass for family was celebrated by Father Jeff Rimelspach at St. Margaret of Cortona on December 18, 2020. Marjorie’s remains will be interred at a later date in Meadow Green Memorial Park Cemetery, Huron, OH. In lieu of flowers the family requests that contributions in Marjorie’s name be made to St. Margaret of Cortona Catholic Church at stmargaretcolumbus.org or to Mt. Carmel Hospice and Palliative Care, 1144 Dublin Rd. Columbus, OH 43215.  Please visit www.tiddfuneralservice.com to send condolences to the Coyle Family.

To send flowers to the family in memory of Marjorie M. Coyle, please visit our flower store.