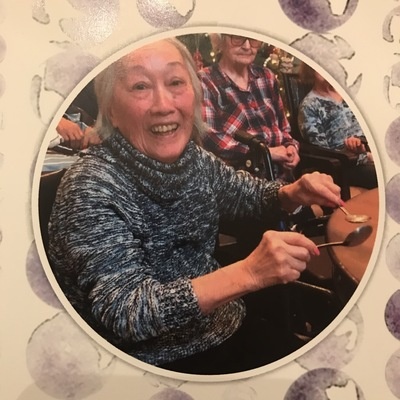 Madalene "Maddy" Bing was born March 18, 1927 to Harry Mark Gate and Ada Youkmon Ng. Although her father's premature death plunged his young family into poverty, they pulled together and overcame obstacles such as taking the IQ test in English when they only spoke Chinese. Much of her education was the result of toilet paper and facial tissues!  Miss Scott, heiress of the Scott Paper Company, placed free pianos in homes of local Chinese kids, and sent around a piano teacher to teach them how to play.  She also sponsored free sleepaway camping trips which Maddy loved.  Maddy graduated from Girls' High in Philadelphia, then won a full scholarship to University of Pennsylvania to major in music and minor in English. After earning her Bachelor's and Master's degrees in 1949, she did further studies at Columbia University and studied organ at Andrews University with Warren Becker. Maddy's two brothers James and Joseph became an engineer and an architect respectively, and her sisters Dorris and Mildred became nurses.  Maddy's children became both musicians and writers.

Maddy taught in the Hilliard City Schools from 1969 to 1993, starting with a year or two of teaching fifth grade at Brown Elementary and then music at Avery Elementary.  Along with becoming forever friends with many of the staff, she was overjoyed when a little boy recovered from a heart condition enough to do the bamboo pole tinikling dance at a school concert.  She joined several groups such as a college honors sorority, a church circle at Hilliard Presbyterian Church where she was the organist for many years, Ikebana International, and watercolor painting classes. She ushered regularly at the Ohio Theater, catching such acts as Dana Carvey and also Gallagher, for which she wisely stayed in the balcony. Because she had so enjoyed her childhood camping and adult camp directing experiences, she confessed that she liked the smell of skunk as it reminded her of those fun times.  Maddy loved to garden and maintained a huge perennial garden until she was 90. She got a big kick out of the deer that jumped the fence to hang out in her back yard, and loved the birds and all the pets she ever had, including many cats (the ones from her childhood were all named Mew), a dachshund with wanderlust, and a black lab mix who stole her neighbors' shoes out of their garages.  With Dorris, she travelled around the world, sending back postcards and collecting souvenirs that were either gorgeous or funny.  When someone once remarked that her jewelry was beautiful, Maddy said, "Honey, it's not beautiful. It's gorgeous!"

She never hesitated to help her family, friends, or their children. Part of the reason she lived so long might have been that she had such a large network of caring people of many generations around her.

Calling hours are 6-8pm FRIDAY JAN. 17 at Tidd Funeral Home, 5265 Norwich St., Hilliard, Ohio 43026.  The family will receive visitors one hour before the memorial service 10:30am SATURDAY JAN. 18 at Reformation Lutheran Church, 1355 S. Hamilton Rd., Columbus, Ohio 43227.  Interment of ashes will be in Bala Cynwyd, Pennsylvania, at a later date.

To send flowers to the family in memory of Madalene Bing, please visit our flower store.