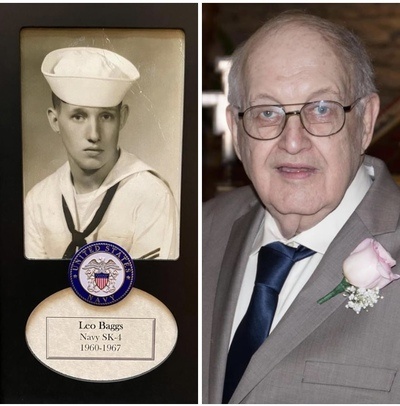 Leo Slater Baggs, Jr., age 79, of Hilliard, Ohio, formerly of Terre Haute, Indiana, was welcomed into Heaven by his Lord Jesus Christ on Tuesday, June 1, 2021.  He was surrounded by his loving family at Riverside Methodist Hospital.  Leo was born May 31, 1942 to the late Leo Baggs, Sr. and Dorothy Baggs in Evergreen Park, Illinois.  A loving father and husband, Leo spent six years in the United States Navy, serving during the Cuban Missile Crisis and touring the Mediterranean Sea, the Middle East and Europe.  After leaving the Navy, he followed in his father’s footsteps and spent more than 35 years working on the railroad as a conductor for the Milwaukee Road, Soo Line and Canadian Pacific Railroads.  Leo loved his family more than anything else and enjoyed spending time with them and trying new restaurants.  He never knew a stranger and could talk for hours about anything-but his conversations always returned to what he was most proud of-his wife, kids and grandchildren.  Leo enjoyed traveling, taking trips to Las Vegas, as well as area casinos with the love of his life, Lucille.

Leo is survived by his beloved wife Lucille Baggs of Hilliard, Ohio, his sons and daughters-in-law: Garrett and Amanda Baggs of New Castle, Indiana and Christopher and Lynsay Baggs of Hilliard, Ohio and his three adored grandchildren: Daniel Baggs, Sarah Baggs and Rebecca Baggs.  He was preceded in death by his sister Geraldine (Baggs) Kostopoulous, his brothers-in-law Arthur Kostopoulous and James Duda.

The Tidd Family Funeral Home, 5265 Norwich Street, Hilliard, OH 43026 (614)-876-1722, assisted the family.  Please visit www.tiddfuneralservice.com to share your favorite memories of Leo or to send your condolences to his family.

To send flowers to the family in memory of Leo Slater Baggs, Jr., please visit our flower store.