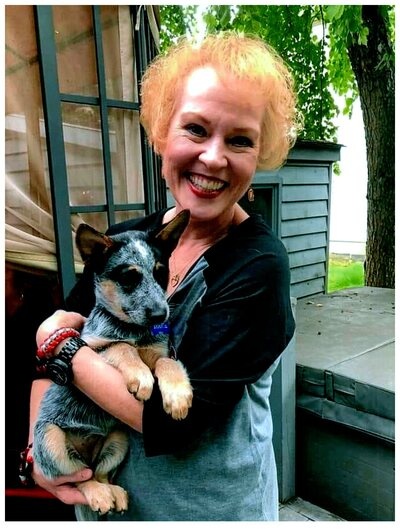 Kim was born April 18, 1961, at Riverside, and grew up in Grove City, Ohio; Lansing, Michigan; and Worthington, Ohio. She was a 1979 graduate of Worthington High School, where she enjoyed singing in school choirs and took to the stage in musicals including “Oklahoma,” in which she played Ado Annie, the girl who “cain’t say no.”

Although she spent some of her early childhood in Spartan country, Kim attended The Ohio State University and was an avid Buckeyes football fan. She was a member of Indianola Church of Christ. As beautiful and outgoing as Kim was, it is no surprise that she had a successful career in cosmetics and fragrance sales, working at retailers including Lazarus, Marshall Fields, Jacobson’s, and most recently, Macy’s at The Mall at Tuttle Crossing.

She leaves behind fond memories: Of the dog-loving toddler who wandered across a street to play with a neighbor’s pet, sending her family into a tizzy trying to find her. Of a 10-year-old in a long green dress and white socks who served as junior bridesmaid at her eldest brother’s wedding. Of a young woman beaming with pride as she decorated her very own condo – with furnishings that included the world’s largest wardrobe that had to be hauled to her second-floor bedroom. Of the woman who faithfully visited her elderly widowed mother and made sure her hair was properly arranged and that her jewelry matched her outfit. Of the hostess who, with a glass of Chardonnay close at hand, arranged charcuterie boards with skill and style. Of the great-aunt who loved, worried about and fussed over her great-nephews every chance she got. Of the stepmother who embraced her husband’s children, suffering mightily as Christopher was lost and rejoicing heartily as Lauren blossomed into a caring and accomplished adult. Of the woman who glowed in the company of her husband, truly the love of her life. She lived her vows to love, honor and keep him “for better or for worse.” Life handed Kim and Gary plenty of both. Only death could dim her bright smile.

Those wishing to honor Kim’s memory might consider making a donation to Pelotonia or the ASPCA. Kim was an organ donor through Lifeline of Ohio, and were she here, she would encourage her friends and loved ones to make the same choice and contribute to the group’s important work.

Please visit www.tiddfuneralservice.com to share your favorite memories and to send your condolences to Kim’s family.

To send flowers to the family in memory of Kimberly Ann James Theil, please visit our flower store.