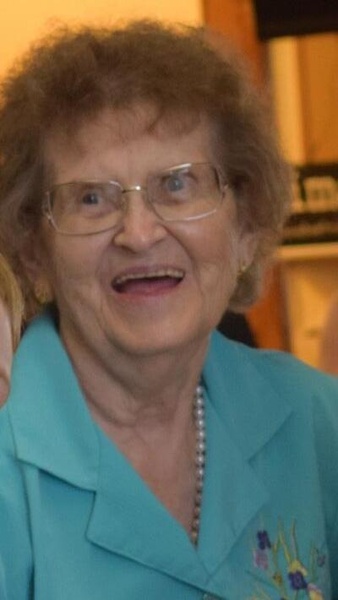 Joy Ann Hoffman was born in Dayton, Ohio on April 19, 1926, the second child of Arthur and Mary (Ankney) Jonas. She grew up in Liberty, Ohio with her older brother Arthur “Scud” and younger sister Rose Marie “Crock”. She enjoyed telling stories about her childhood and the pleasures of living in a small, close-knit community.

Joy was the valedictorian of her high school class and graduated from Bowling Green State College. She taught physical education at the high school in Greenville, Ohio. While teaching she met her husband Jerry Hoffman, a fellow teacher and coach from a nearby district. They married and started their family, living in Liberty, Greenville and Dayton for a number of years.

In 1976, they moved to Hilliard which became their permanent home. Joy and Jerry joined the Hilliard Methodist Church that year, staying actively involved for the remainder of their lives. Joy was a ready volunteer in Church activities as well as at the Hilliard Senior Center. She was well known for her chicken noodle dinners and baked hundreds of pies over her life. Jerry joked that he should have opened a pie shop, as many pies as Joy made.

She was an avid sports fan, equally enthusiastic about national games as her great grandson’s little league. She enjoyed music, likely due to the influence of her mother’s piano playing and family singing. Most of all, Joy loved her family – those near as well as those farther away. She loved and relied on her son Joe and delighted in her grandchildren and great grandchildren, carrying their pictures in her wallet and purse, and surrounding herself at home with their photos. At every family get together, she would bring at least one tote bag with articles or items that she saved with them in mind. She looked forward to weekly calls with the grandchildren she did not see as often, and the Jonas-Ankney family reunion was a favorite event. Joy liked to say that she had relatives in 17 states, which is why she always answered her phone, just in case a family member was calling.

A service will be held on Friday, May 13, 2022 at the Hilliard United Methodist Church, 5445 Scioto Darby Rd, Hilliard, Ohio. Visitation begins at 3:30 and the service will immediately follow at 4:30p.m. Joy’s burial will at the Dayton Memorial Park Cemetery, Dayton, Ohio at a later date.  Please visit www.tiddfuneralservice.com to share your favorite memories and to send your condolences to the Hoffman Family.

To send flowers to the family in memory of Joy Ann Hoffman, please visit our flower store.