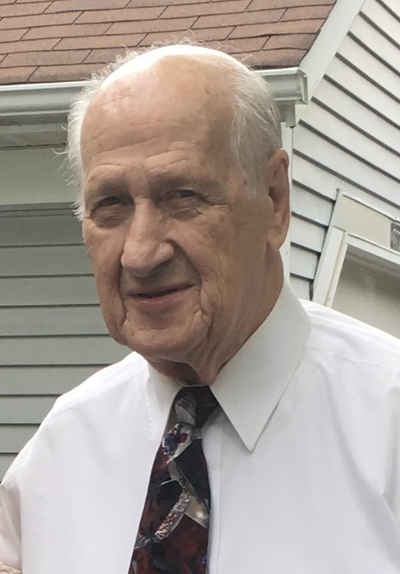 Joseph S. Strantz, age 86, a long-time resident of Dublin, OH, passed away Saturday, February 1, 2020 at Kobacker House in Columbus, OH. Born in Greenpoint, Brooklyn, NY to the late Joseph and Wanda Strantz, Joe was a veteran of the United States Army. He retired from American Electric Power in 1993 after 19 years of service as an Electrical Engineer. A parishioner of St. Brendan the Navigator Catholic Church, Joe was active in the American Legion, Freeport, NY Post while a resident there and was most active with the Association for the Help of Retarded Children (AHRC). In addition to his parents, he was preceded in death by his beloved wife Dolores V. Strantz, who passed in 2019, his sister Frances Clare, nephew Michael McConnell and niece Kelly McNamara. Joe is survived by his daughters: Linda Mary Strantz, Lisa (Eric) Oliver and Laurie (Tom) Donahue, his grandchildren Amanda Donahue and Jack Donahue, sisters Audrey Strantz and Christine McConnell, nieces and nephews: Karen (George) Ujlaky, Kenny McConnell, Richie McConnell, Tommy Reynolds, Shawn McNamara and Julie Clare, and his many friends. Family will receive friends from 5:00-7:00p.m. MONDAY, FEBRUARY 10, 2020 at the TIDD FAMILY FUNERAL HOME, 5265 Norwich Street, Hilliard, OH 43026 (614)-876-1722 where his Memorial Service will follow the visitation and begin at 7:00p.m. MONDAY. In lieu of flowers, friends are asked to consider memorial contributions to: AHRC, www.ahrc.org, Kobacker House, www.ohiohealth.com or the Wounded Warrior Project, www.woundedwarriorproject.org in Joseph’s memory. Please visit www.tiddfuneralservice.com to send condolences to the Strantz Family.

To send flowers to the family in memory of Joseph S. Strantz, please visit our flower store.