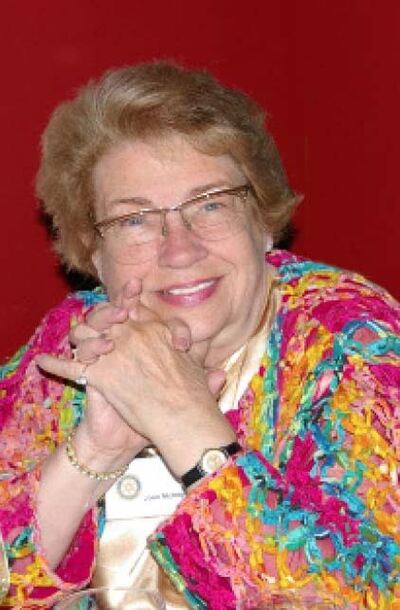 Joan Haines McIntee, age 88, passed peacefully surrounded by her loving family on December 15th, 2021. Born the oldest of three children, she had a life well-lived, deserving of admiration and thanks for all the lives she positively impacted around the world. We believe God has set a special place of honor for her. After graduating from Mishawaka High School, Joan attended Holy Cross School of Nursing, graduating as a Registered Nurse. This began her many decades of selfless service to others. Joan was beloved in the many communities where she lived and served. Those communities included the greater Knoxville, TN area, Bethel Park, PA; and Bettendorf, IA just to name a few. Joan held numerous leadership positions including President of Rotary Club, Farragut (TN), President of the Bethel Park Chamber of Commerce (PA) and countless other Board member positions of various organizations. She was honored as the 2008 Volunteer of the Year by Tennessee Friends of Libraries, a Dolly Parton organization.

Joan was accomplished in over 10 different needle arts. She enjoyed crochet, scherre braiding, sewing, candle wicking, and Teneriffe embroidery just to name a few. For 12 ½ years she was an advice columnist/designer for the internationally circulated “Women’s Circle Crochet” magazine and had over 200 designs published. Her award-winning designs were featured on two front covers of the magazine. She published two booklets, “Teneriffe Embroidery” and “Teneriffe Embroidery II.” (an authentic colonial needle art). She was passionate about teaching and perpetuating needle arts to future generations. Her tireless dedication was recognized by The Daughters Of The American Revolution and presented the Women In The Arts National Award.

Joan was inducted as a member of the Authors Guild of Tennessee. She was a certified Leadership Development and Organizational Development Consultant.  She was honored in: “World Who’s Who of Women”; “International Who’s Who In Community Service”; “Two Thousand Women of Achievement” (Internationally); “Dictionary of International Biography”; “International Platform Association”; “Who’s Who of American Women”; “Community Leaders of America.” She was recognized by many elected officials and was included in the “U.S. Congressional Record” for her service.

Prior to her relocation to Ohio to be closer to family, her community activities included Lifetime Member of Farragut/West Knox Chamber of Commerce, Rotary Clubs of Farragut and Tellico Lake, and Parliamentarian for Friends of the Vonore Public Library. Joan's Catholic faith was unwavering. She relished serving as a Eucharistic Minister at St. John Neumann Catholic Church and served as lector and organist in her previous parishes.

In Lieu of Flowers, please consider donating to your local Rotary Club, Rotary International or to the Friends of the Library in Vonore, TN.

For photos and additional details of Joan’s many accomplishments during her life of selfless service to others, please visit:

To send flowers to the family in memory of Joan Marie McIntee, please visit our flower store.