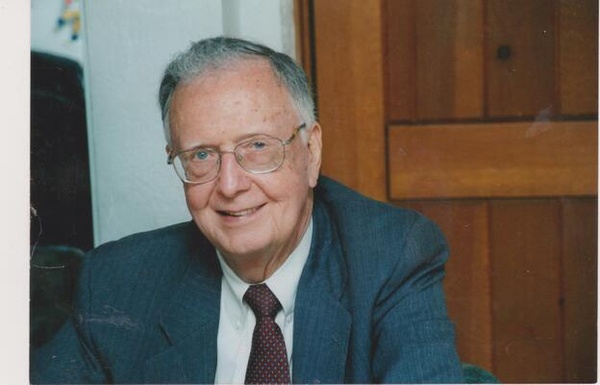 Howard was born in Columbus, Ohio, the last of eight children of the late Clarence and Zelpha Geyer (née Conover).  His brothers (Corwin, Elwood, Vean, and Harlan) and sisters (Delores, Ruth and Norma) preceded him onward. We take heart that he is now in the midst of a joyous family reunion, trying to get a word in.

Born just before the Great Depression, Howard spoke with admiration of the determined efforts his parents made to pull their family through, and of the pride he felt when able to contribute his small earnings from delivering the Columbus Dispatch.  He graduated from North High School, Class of 1944 and served as Sergeant in the US Army in 1945.  He earned a Bachelor’s degree in Industrial Engineering from OSU.  He was a dedicated Buckeye all his life.

He met Eleanor “Elly” Tate from Binghampton, New York on a blind date, and they married in 1958. Howard and Elly shared 62 years of marriage building a path and a family together and navigating life. To the end he told her often, “My day doesn’t start until I see your face”.  He leaves behind two daughters, Katherine (Rob) and Elaine (Didier) and a son, Douglas (Erica) and six grandchildren, Elise, Claire, Natalie, Olivia, Anna and Grant. As a husband, father, grandfather, uncle and friend he will be deeply missed but has left us rich in memories that will bring him close again.

Howard enjoyed his career in the management of precision and machine tool firms, first at the Warner and Swasey Company in Cleveland and in Bessemer City, North Carolina, and then at Brown & Sharpe in North Kingstown, Rhode Island.  In 1996, he purchased the Overly Hautz Motor Base Company in Lebanon, Ohio where he served as President and CEO until he retired.   He enjoyed both professional and family travel to Europe, Asia and Africa; he had a terrible ear for languages but is fondly remembered for his efforts.

Howard was an avid reader and donated bags of the books he had enjoyed to others, keeping a few favorites on his bookshelves. He shared his love of Dixieland, Big Band swing and soft trumpet jazz with his children, a love that has flowed through to his grandchildren.  He gave his time to his community throughout his life, including as a member of the Cleveland Little Hoover Commission, an elected School Board official, Sunday school teacher, soccer and basketball coach in East Greenwich, RI, and as a volunteer tutor in Dayton, Ohio supporting both older and younger people to be strong readers.

A small service was held for close family Friday, June 12, 2020 at the Tidd Funeral Home in Hilliard, Ohio. In lieu of flowers, the family welcomes donations to the Alzheimer’s Association (Central Ohio Chapter, 1379 Dublin Rd, Columbus, OH 43215 or  https://www.alz.org/centralohio). Please visit www.tiddfuneralservice.com to send condolences to the Geyer Family.

To send flowers to the family in memory of Howard W. Geyer, please visit our flower store.