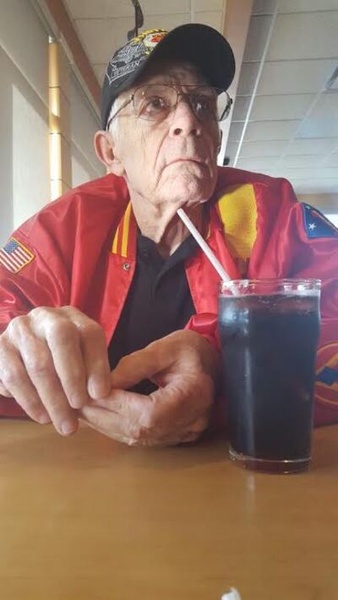 Harold Emerson Willis, Jr., age 77, of West Jefferson, Ohio, died Friday, May 20, 2022, at Doctors’ Hospital in Columbus, Ohio. Born in Columbus to the late Garnet and Harold E. Willis, Sr., Harold was a graduate of Hilliard High School, Class of 1962. He was a proud United States Marine who served his country 1962-66 and was Honorably discharged having attained the rank of Sergeant. After his military service, Harold graduated from the Columbus Police Academy and served as a Columbus Police Officer until 1990. He would become a security officer with the Ohio Department of Jobs and Family Services. Later, Harold worked for Advance Auto Parts to stay busy in his retirement years. He was an avid Oho State and Cleveland Browns football fan and was proud to be the owner of his successful horse farm.

His daughter Kayla writes: "Harold was a "One-of-a-Kind" man who was as hard-headed as he was stubborn.  But boy, did he love his family!  Often times you could find him sitting at his kitchen counter engaging in our silly conversations.  Proud Marine and retired police officer, Harold continued to work delivering parts for Advance Auto.  In his early years, he ran a horse farm training, boarding and giving lessons.  Harold absolutely loved being around horses.  As we grieve his loss, we all share the wonderful memories we had with him.  We will miss him dearly, but find comfort knowing he is reunited with his mom and dad.  We all love you very much, Harold and you have impacted so many people who had the privilege of knowing such a great man."

Harold was preceded in death by his parents and by his brother Robert Willis. He is survived by his sister Jan Lyon, his children Gary (Vickie) Willis, Kimberly (Jason) Gusler, and Kayla (Andrew) Willis, his grandchildren: Tyler Willis, Rick Lockhart, Ryan Lockhart, Joshua Gusler, Courtney Nickell, Morgan Gusler, Amber Gusler, Michael Crotty, Mavis Crotty, and Ashlea Berger, and his nieces, nephews and many other beloved family members and friends.

Family will receive friends from 5:00-7:00p.m. THURSDAY at the TIDD FAMILY FUNERAL HOME, 5265 Norwich Street, Hilliard, OH 43026 (614)-876-1722 where his Funeral Service will be held 10:00a.m. FRIDAY, MAY 27, 2022 with Chaplain William A. Hartfelder, CPD, officiating. Burial with Police and Marine Corps Honors will be held immediately after the service at Wesley Chapel Cemetery. In lieu of flowers, please consider a memorial contribution to Wounded Warrior Project, PO Box 758516, Topeka, KS 66675-8516 or on-line www.woundedwarriorproject.org. Please visit www.tiddfuneralservice.com to share your favorite memories of Harold and to send your condolences to the Willis Family.

To send flowers to the family in memory of Harold Emerson Willis, Jr., please visit our flower store.