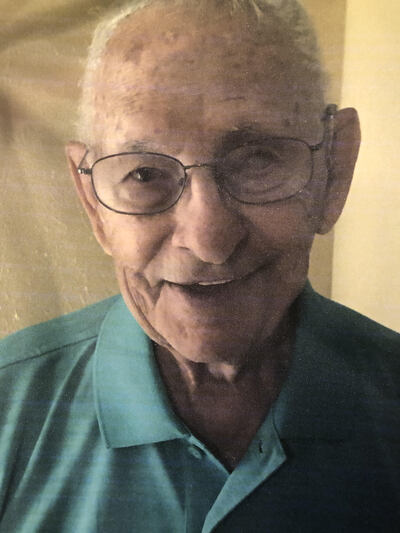 On December 4, 2020, at 95 years of age, Glenn Joseph Hutchison of Midlothian, Texas spent his last day on earth and enjoyed his first day in heaven-now free of pain and tears from a recent illness. As a child, he believed in Jesus as His Lord and Savior, was saved by God’s grace,” was a mighty man of God, and loved His Savior with all his heart.”

Glenn was born on January 25, 1925 to Madeline(Drake) and James Nelson Hutchison of Columbus Ohio and as his older sister, Katharyne (Kaytee) Liston born 1919, tells it- he was ”the best present she ever received.” His family, friends, and the rest of his world believed this also. He was known for his engaging smile and warm hugs, delightful laughter, sharp sense of humor and some orneriness, positive grateful attitude, quiet patient spirit, friendliness, hard work, love of God, and for being a good Samaritan-always helping out anyone in need-including family, friends, and strangers.

He is survived by his daughter Dianna (Jerry) Thompson of Midlothian Texas, 10 grandchildren (3 honorary) with an additional 5 spouses, 17 great grandchildren (3 honorary) with an additional 3 spouses, one great great grandchild, sister/brother-in-laws Steve (Rita) Smith, Marjorie(Robert) Thatcher, James (Vivian) Osborn, Kathy Garza and her family; and many nieces, nephews, cousins, and  friends who will miss him dearly but remember his life and love.

Greeting Glenn in heaven were his wives Betty (Smith) married 43 years, Barbara (Heidt) married 19 years, his beloved son David (Theresa) Hutchison, his mother and father Madeline and James Nelson Hutchison Sr and mother/father in law Lester and Thelma Smith, all his siblings Katharyne (Kaytee) Liston, James N . Jr, Earle, Eugene, and Naomi (Nomie), and so many other friends and family members. How precious that reunion was!

You can not talk about Glenn without talking about God and Jesus. He was the one most important person in his life from childhood until his death. He was a Bible reading, church going, faith living, gospel sharing, hymn singing, heaven going, and Jesus loving believer. Glenn was a charter member of Central Baptist Church and Clintonville Baptist Church of Columbus, Ohio, and he led in remodeling construction at Clintonville Baptist Church and First Baptist Church Logan, Ohio. He was a deacon and taught Bible classes, organized the communion and baptisms, sang in the choir and the men’s gospel quartet, cared for the landscaping and repairs, and went on mission trips at age 81 with friend Tim Welsh to help others in Mississippi. In his daily life, he was always helping his sister Kaytee with dementia, his sister Nomie with strokes, and anyone he met who needed help with car or home repairs. Best of all, he lived a servants’ life and when others saw his love and life, many accepted Christ into their lives-including most in his family from children to grandchildren. They are now his spiritual legacy-the ones serving God here and in foreign lands.

Glenn enjoyed growing up in Columbus, Ohio even during the Great Depression where he and his brothers had few possessions or food but the freedom to roam and enjoy great wild childhood adventures. He attended Columbus North High School, went to work to help the family during World War II-working 13 hours a day, but his dad James Nelson made sure he graduated high school at night school.

He always worked so hard and was a dedicated employee for Clark Grave Vault Company for 37 years until he retired in 1980. Glennie found his sweetheart Betty in 1947 and they married. He loved her blonde hair, blue eyes, kindness, and that first kiss! In 1948 their loving daughter Dianna Kay was born and more joy was added at David Glenn’s birth in 1956. As his family before him, they built a life of respect, integrity, love, and laughter together-enjoying church, his children’s school activities, family picnics, hard work, and lake adventures.

When he retired in 1980, Glenn and Betty built a retirement cottage at Lake Logan, Ohio where they served at church, helped others, and welcomed family and friends for reunions, sledding, picnics, fishing, and pontoon boat rides-making for many fun memories for their grandchildren. When Betty suddenly passed away in 1990, he was so sad but found new friends.

He met Barbara Heidt walking her dog, a friendship developed, and they were married in 1992. He now had a whole new family to love and include in his life and he filled it with a motorcycle and great family adventures to Canada, nearby parks, and area festivals for 19 years until Barbara also passed away suddenly in 2012.

It was then that Glenn moved from Ohio and in with his daughter Dianna Kay and Jerry at Midlothian, Texas. What a blessing that was for them all! For 8 years he loved the activities at Oak Crest Baptist Church and Pastor Blain Craig’s sermons. He enjoyed the food especially black walnut ice cream, Reese’s candy, cherry pies, and vegetable soup. He loved collecting every toy he could.  He loved going outdoors-tweeting with the birds, talking to the donkeys Halle and Lujah, petting Sandy and Macy, and soaking up the sunshine. He loved going on “adventures”-train rides in Texas/West Virginia, a Mississippi river boat cruise, trips to Disney World, the Ark,Tennessee/Arkansas park vacations, and visits back to Lake Logan to swing and clown around with his best bud Eugene.

But most of all, he loved being with family- Di and Jerry, the kids, and the grandkids-and their love, spirit, and energy when they visited-especially on the holidays. What a blessing God gave us when he created Glenn! It was a life well lived. May he hear God say, “Well done, good and faithful servant.”

In lieu of flowers or gifts, you may want to consider a donation to missions to either of Glenn’s grandchildren.

1. Jennilou(Lulu Thompson-since 1998) and Don Plankraiphet (together since 2012)-local pastor of Bethel Bangkok Church and working  with the university students in Bangkok, Thailand.

2.Jason and Tasha Thompson(both since 2003) in east Asia working on curriculum in a local elementary and adopting special needs children.

If you choose to, please send check donations to Dianna Thompson c/o Thompson missions 1130 Pimlico Dr, Midlothian, TX 76065. Your contributions will be added to their foreign accounts. Thank you.

To send flowers to the family in memory of Glenn Joseph Hutchison, please visit our flower store.