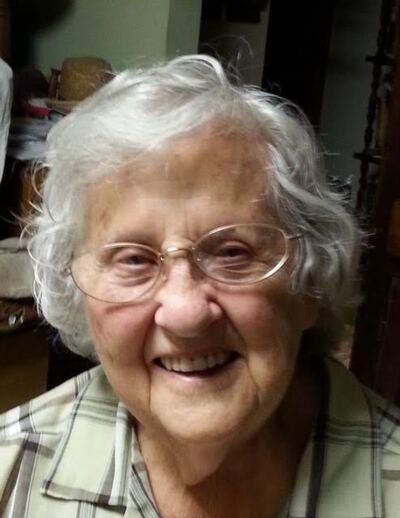 Freda Elizabeth McGirr, age 97, passed away on May 8, 2020, at the home of her daughter in Hilliard, OH.  She was born at Red Hill, Parkersburg, WV to the late Carl H. and Bertha Gephart Brethauer.  She moved with her parents to Little Hocking, OH in 1938 and graduated from Belpre High School in 1939.  She married Franklin McGirr in Providence, RI on April 1, 1945.

She was a lifelong member of St. Paul Lutheran Church, Parkersburg, formerly of Red Hill, where her grandparents were among the founding members.  Freda was active in several church organizations including Lutheran Women’s Missionary League, Sewing Servants, Senior Fellowship, AAL, and Thrivent. She began arranging the flowers for the altar at age 15, and continued into her 90’s.  Freda was a charter member and first president of the Little Hocking Garden Club founded in 1953, and remained active for over 60 years.  She was Regional Director for Region 11 of the Ohio Association of Garden Clubs in 1991-92 and received the state Master Gardener Award in 1995.  Freda won numerous ribbons at local, county, and state flower shows for her floral arrangements and specimens.  She was an avid gardener, seamstress, crafter, and baker, and worked with her husband on their dairy farm.

To send flowers to the family in memory of Freda Elizabeth McGirr, please visit our flower store.