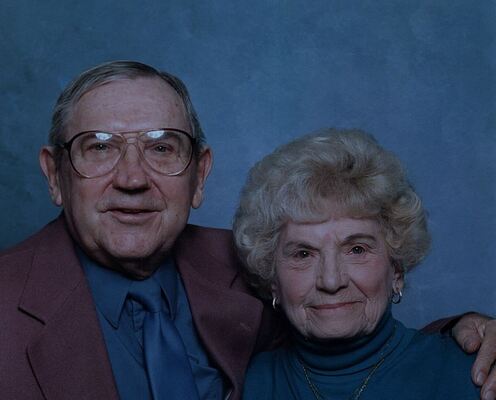 Edward S. (Hutch) Alexie passed away on Sunday April
26, 2020 in Columbus Ohio. He was born on May 23,
1918. He was just 27 days short of his 102th birthday. His
family was from Hoegaarden Austria coming to the USA
in 1890. He was born in Kent Ohio to Steve and Amilia.
He had 4 siblings Mary (Maimee), Corina (she died of the
Spanish flu in 1918), Jon and Joe. All preceding him in
death. His family worked for the railroads and Hutch was
always hopping the trains.

Hutch met his wife to be Ruth Baughman on Brady
Lake in a canoe and they were married on March 14,
1941 and were married for almost 72 years. She passed
away on December 16, 2012. Two weeks after they were
married, he shipped off for the Army and fought in 3
campaigns during World War ll. He was a staff sergeant
in the 751st tank battalion and the 15th Calvary. He was
awarded two bronze stars, a good conduct medal,
sharpshooter metal, expert tank medal and a 50th
anniversary medal from France for D-day as well as
others. After his discharge in 1946 he went to work at BF
Goodrich /Chemionics in Akron. He retired in 1983 with
almost 38 years of service. In 1964 they bought a lot at
Atwood lake in Dellroy Ohio. He started to build a cottage.

They spent every weekend and summers on the
lake boating, swimming, fishing and entertaining. He
really enjoyed it at Atwood. Most Saturdays he would
load up all the neighborhood kids in his truck and take
them into town for ice cream. Hutch loved to play cards and spend time at the
Carovillese Club and Castel De Sangro on Akron’s North
Hill. They also loved to go to the spaghetti and fish
dinners at different clubs “on the hill”.

Hutch and Ruth moved to Columbus Ohio in 2006
when their only child, Carol got remarried. They lived
with Carol and her husband Craig Heyder. Carol became
Hutch’s primary care giver after Ruth passed away. She
saw to it that they had outings every week and lunches
out. Hutch and Carol spent their summers at Atwood lake
until the fall of 2018 when at the age of 100 he sold the
cottage he so loved after being on the lake for 54 years.
Hutch was still getting around and enjoyed a big
Thanksgiving Dinner with neighbors and friends. By
December 11,2019 his body just started to give out. Ohio
Health Hospice was called in. He stayed at home and was
cared for by “Dr.” Carol and Craig along with two wonderful nurses Sarah and Ben. He fought hard and did not want to give up. But after 4 ½ months he passed peacefully.

Anyone who met him loved him and would call him a
friend. Everyone has a story of how Hutch touched their
life. Hutch always wanted to make people happy. He
would always lend a helping hand.

He was a great father and husband. He loved his only
grandchild Alexis and picked her up many days from
school. He would always ask her if she had the “shorts”
and then slip her some money. Hutch is survived by his
daughter Carol and son-in-law Craig Heyder of Columbus.
Granddaughter Alexis Lux and her husband Craig Sutter
of Oklahoma City. Many nieces and nephews.

Due to the Covid 19 virus restrictions Hutch has been
cremated and the family will hold a Military Funeral at a
later date at the Ohio Western Reserve National Military
Cemetery Seville, Ohio.

To send flowers to the family in memory of Edward S. "Hutch" Alexie, please visit our flower store.